March 2, 2008 (Daily Yomiuri) – The government and business groups are set to jointly promote the use of 21 revolutionary new technologies, such as an advanced form of solar-power generation and underground storage of carbon dioxide emissions, as part of a plan to cut greenhouse gas emissions, government sources said Saturday.

Adoption of the plan, which also forms part of a national road map for promoting technological development, by the world’s major polluters could account for as much as 60 percent of the 40 billion ton cut in global emissions by 2050 that Japan has proposed, the sources said.

The government is set to announce the plan at a meeting of ministers from 20 countries on global warming to be held in Chiba starting March 14. END_OF_DOCUMENT_TOKEN_TO_BE_REPLACED

StatoilHydro and the Indian oil company ONGC have agreed to jointly explore the potential of developing Carbon Capture and Storage (CCS), and CDM (clean development mechanism) projects in India.

February 11, 2008 (Bangkok Post) – To cope with high oil prices and reduce greenhouse gas emissions, Thailand must pursue four options: development of renewable energy, energy efficiency, nuclear energy and carbon capture and storage. However, renewable energy has certain limitations, and options for each country are different depending on availability of natural resources, technologies and manpower. This is why the Thai government has mainly concentrated on renewable energy based on domestic raw materials and wastes.

Financial incentives together with the provision of information to investors and consumers have proved to work wonders, for instance in the promotion of biofuels. The consumption of gasohol (E10) more than doubled in 2007. With the introduction of E20 in 2008, daily demand for ethanol should reach two million litres by 2011 when new cars capable of using E85 should be on sale. 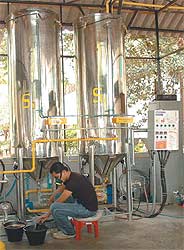